FOURTEEN PIANOS: A Blueprint for Hope in the HeART of Trenton 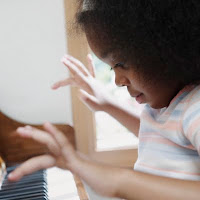 In 2005, when Trenton NJ natives Jacquie and Sterick Ivey bought the Trenton Conservatory of Music – founded by Juilliard piano professor William O’Toole in 1920– there were 14 pianos still inside, along with original manuscripts of instructions books on piano technique,sheet music in abundance, and evidence the place was designed with the needs of musicians in mind. “Professor O’Toole believed that Trenton needed and deserved a music conservatory” Jacquie explained in an interview for this article, “and I took piano lessons here as a child.” When Sterick, who works in real estate, saw that the property was for sale the couple – parents of 2 girls, Makenzie age 7, and Peyton age 4 - made a commitment to bring back and expand upon O’Toole’s vision.
“The Trenton High School band used to be nationally competitive and now it is just hanging on” Jacquie states. “Having taken lessons here and knowing the value of the arts to kids’ lives and to the community, I wanted to get those instruments into kids’ hands. I wanted to rebuild that High School band.” But that’s not all they have in mind. Not even close.
“Within a 7.5 mile radius of the city, the entire world is represented in the population, but it is fragmented” the couple explain. “There are few opportunities for people to interact outside of their familiar group. We want to create a way for people to experience the foods, music, art and history of cultures different from their own, right here in Trenton. If people can’t travel and see the world,”Jacquie says with a smile, “we will bring the world to them.”

This is cutting edge thinking. Multi-cultural community centers are among the most highly recommended ways to create health and vitality in cities. Charles Landry, author of The Creative City: A Tool KitFor Urban Innovation and a world leader in designing cities that can survive and thrive in the 21st century, devised the Creative City Index which identifies diversity and expression, openness, trust, tolerance, accessibility – qualities that are natural by-products of the kinds of activities and events taking place at the Conservatory – as among the key indicators that a city will be resilient in difficult circumstances and creative in response to its problems. Research also shows a direct link between involvement in the arts and improved health and social life by:


“We are right in the center of Trenton, walking distance from the train station,” Sterick says, emphasizing their location makes the Conservatory extraordinarily accessible for the greatest number of people. And since their grand opening earlier this year, some very interesting people have walked through those doors and become part of their evolving network of artists, teachers, and volunteers from a wide range of backgrounds. Jacquie gave up her position as a Pre-School Director to “step out in faith” and take on this project, her leadership here rooted in the values, skills, experiences that  resulted in her successful development of a large, culturally-rich, diverse staff. “We constantly meet such interesting, accomplished people who want to train others in an art form, teach their craft, give their gifts through performance, and we want to provide a nice, affordable venue for all these people to share their skills and abilities.”
The original blueprints for the Conservatory were left inside the building along with those 14 pianos. If there is a blueprint for hope, the Iveys have that one, too. 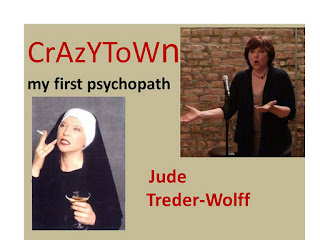 About CrAzYToWn: How do you know that nice, helpful guy in the next cubicle is a psychopath? You don’t. In Crazytown, real-life therapist/performer Jude Treder-Wolff takes you down the rabbit hole of belief that led to her being blind-sided by reality. It’s a comic take on an over-eager therapist getting over herself (when nothing else seemed to be working). And these days, when our phones are smarter than we are, and we can meet, fall in love, shop for a ring and get some counseling with someone and never meet them in person – it’s a cautionary tale about how authentic a completely fake person can be. MORE INFORMATION