This story was written for a friend whose carefully-laid plans to leave her job - at which she had stayed many unhappy years out of a desire for security - and start a business were upended when she received a diagnosis of Stage 4 metastatic breast cancer. Shortly after that her long-term partner left the relationship. She did not believe she had the strength to fight cancer and deal with the emotional fall-out of loss.


At check-in she was handed her boarding pass as she watched her bags disappear into the tunnel that would take them to the proper vehicle that would transfer them onto the proper plane. She watched them go, wondering if she had taken clothes for all the possible kinds of weather in Ireland. Cold and wet in the early morning. Cool and windy when she went up into the mountains. Sunny in the afternoon.


The flight went exactly as planned. She arrived fresh. Rested. Ready. When she stepped off the plane she was stunned to see that the place she had landed was not Ireland. The plane must have gone wildly off course and no one on board had any idea this had happened. All the while she was preparing for Ireland she had been enroute to some other, completely foreign place. And everyone else seemed to think this was fine. Everyone else just went on with their business as if nothing was wrong. She could not find her bags in this place. She could only surmise that they did not make it onto her plane. Or they were placed on the plane that was meant for her while some awful and unknowable error took her onto a different one. Terrible mistakes had been made with her things. Her clothes. Her books. Everything she needed to take care of herself. The things that, when she had them with her, made her feel at home. Everything was gone and no one seemed to think this was a problem.


She tried calling her travel agent but the call went to voicemail every time. She heard nothing back. She had no information about this place, this foreign country into which she had been dropped with her will, without her consent. And she did not want to know about it. Being here is a mistake. Or a trick. She did not want to know about this place.


Exhausted, she stumbled into a hotel to find a place to rest. Music is playing in the lobby, a song she has never heard before. A song she finds annoying mainly because she cannot get it out of her head once she comes into the room. The song plays over and over in her head. There are no words to this song, just music. Its lodged there, in her head. The first outside sound she has allowed into herself since she landed in this place. 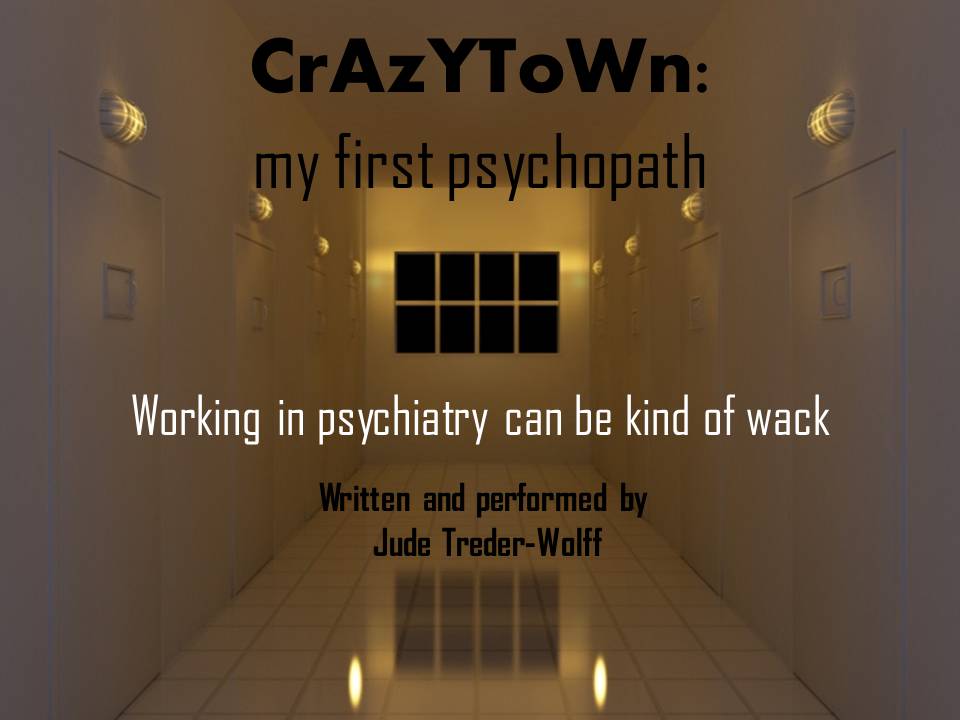 Jude Treder-Wolff is a consultant/trainer and writer/performer after a long career as a creative arts psychotherapist. She will perform her show Crazytown: my first psychopath  at The Pit-The Peoples Improv on Sun. Nov. 3 at 8 pm

January 24, 2014
Since September Lifestage has been offering a monthly training workshop exploring the use of improvisation to develop Emotional Intelligence . These workshops have been geared toward the work done by clinicians, educators and trainers who guide the process of personal change or professional development, but as it turns out we have enjoyed some interesting diversity among the participants -  managers, business owners with both employees and customers, community activists, and performers.      Below is a collection of the exercises we have used in the workshops, accompanied by some studies that supports their use.  by Jude Treder-Wolff, LCSW, RMT, CGP       Why Improvisation? Improvisation is a powerful way to become aware of mental habits and patterns. Reflecting on our inner experiences after engaging in an improvisation exercise provides an opportunity to decide whether our mental habits are effective and useful or self-limiting and obsolete.  The tensions of the crea
60 comments
Read more

April 27, 2010
Nicholas Wolff, LCSW, BCD, TEP , Director of Training at Lifestage, Inc and Jude Treder-Wolff, LCSW, RMT, CGP, Trainer/consultant and writer/performer. Follow on twitter @JuTrWolff         “To begin assembly one must have the right attitude,” goes a Japanese instruction for assembling a particular object, as quoted in Zen and the Art of Motorcyle Maintenance. The "right attitude" is one that best serves the action we are preparing to engage in, j ust as an athlete warms up his/her muscles before using them in the stress of a work-out or game. Psychological and emotional "muscles" that are properly warmed up will perform more effectively and make it less likely that we will experience strain or allow fear to produce a shut-out when things get rolling.     The right warm-up makes everything learned in a training situation or classroom more accessible and immediately useful to the trainee/student. New skills and knowledge - in education, personal growth or a profe
47 comments
Read more

December 12, 2013
by Jude Treder-Wolff, LCSW, RMT, CGP @JuTrWolff Nelson Mandela famously forgave the people who imprisoned him, an extraordinary thing especially since they were willing actors in an abusive system, one that imposed decades of indescribable suffering and violence on millions of his people. He forgave Ronald Reagan and Margaret Thatcher for doing business with the apartheid regime and would probably forgive members of the U.S. Congress and political pundits who labeled him a Communist and terrorist even upon the announcement of his death.       There were American diplomats who ignored the ignored the brutality and violence of the apartheid government and supported his imprisonment. Most of us would find that hard to take.  Most of us struggle to accept being misjudged or unfairly labeled even when the consequences are simply emotional tensions. And i n our sound bite culture, there is a rush to idolize a person with such a remarkable emotional capacity.
9 comments
Read more