Developing Emotional Agility And Other Acts of Creation

Its 9 am. A group of staff therapists gather in the nicely-appointed conference room at the central office of this large not-for-profit organization for a special training session. The clinical director arranged this following a traumatic incident at one of the satellite locations, in which a new client was ambushed and assaulted as she walked through the dark parking lot to the office. The perpetrator disappeared into the woods alongside the largely-abandoned strip mall where the office was located and where staff had never felt safe in the first place. The young woman had broken away and screamed "call 911" as she ran through the door, triggering a legitimate panic in everybody there. Both therapists and clients working in quiet rooms were jolted into full-blown fight-or-flight mode. Reports of the incident had a ripple effect throughout the organization, since many of the satellite offices were in similar spaces where staff felt like sitting ducks having to stay open until 10 pm.
The staff are angry and they know what they want: security at their facilities. Administration is in full defense mode, arguing that there is nothing in the budget to hire security, so providing it will cost some staff members their jobs. The tension is palpable.

Enter the trainer. That would be me. The supposed promoter of sanity in the crazytown that is a roomful of amygdala-triggered people. The amygdala is the "alarm system" in our brain that signals the perception of threat and out of which arises unthinking fear, anger and anxiety - unthinking because when the amygdala is triggered the prefrontal cortex, which carries out the reasoning, thinking-things-through mental functions is shut down. In situations like this, where the stakes are high on both sides and everybody feels somewhat threatened a kind of emotional paralysis develops that is naturally contagious.
Emotional agility - defined by the Mind-Fitness Training Institute as the "cognitive and psychological adaptability, or the ability to think rapidly and creatively under stress, anticipate or quickly adapt to uncertain or changing situations and improvise when faced with obstacles" - is difficult to impossible when the stress response is flooding us with cortisol and adrenaline. Amygdala-driven emotional states make us more rigid, more likely to take a polarizing position and defend it, closed off to rational arguments.
To add to the mix, I am far from a detached observer to the situation. I have a bias here, having spent years earlier in my career working as a therapist in which the safety of the staff always took a back seat to a full census on the psychiatric ward or a full schedule at the clinic. As clinical staff we had to get the work done or get a job someplace else, except most hospitals and clinics operated the same way.
Because of this bias my own warm-up is key. My objective is to enhance the understanding between the staff and administration, and if we are successful at disarming the people ready to take aim at one another perhaps discover some creative possibilities for the organization going forward. So I warm up using an exercise I have found enormously helpful going into these highly-charged training situations, a storytelling exercise I learned in a playwriting class, an exercise designed to circumvent the emotional reactiveness by engaging with it:
Step One. Write an essay about something I find outrageous and horrible. (Choosing a topic about which I feel outrage is, unfortunately for my emotional health, not a problem). The essay is to be injected with the full force of feeling one has about the issue, then put to the side.
Step Two. Write about the same issue, identifying the personal values one has about the issue, the values that fuel outrage, as exhaustively as possible.
That's it. And it works. Writing down the values that drive strong emotional responses is an evidence-based technique, as it turns out. The journal Psychological Science published research showing that "reflecting on personal values can keep neuroendocrine and psychological responses to stress at low levels." Writing about personal values actually influences the bio-chemistry of stress in the body, resetting the internal stage for dealing with difficult circumstances with a re-engaged prefrontal cortex. Another study validated the stress-resilience-building effects of identifying andwriting about important values, showing that "people who had affirmed their values were more receptive to negative feedback, recognizing mistakes and taking steps to correct them." In other words, self-affirmation of one's values, knowing why we do what we do, helps us be more agile and facile when we flop. Good to know when going into situations like this one, where the potential for failure is fair to partly going to happen. Thanks, Science!
Onto the training. We break out into small groups in which at least one person from administration, and one clinical supervisor is matched with two or three therapists and support staff. Each small group is to identify the values driving their operations day to day. All ideas are accepted. When we come together as a large group we examine the common values each small group identified and those of each stakeholder in the organization. There is conflict about how to express the values but there is also common purpose. And much less tension. People are talking and listening to one another. It is a start.
Having moved from the amygdala-driven emotional polarization to a more centered, thoughtful group energy, we are able to explore the situation using the following improv exercise: 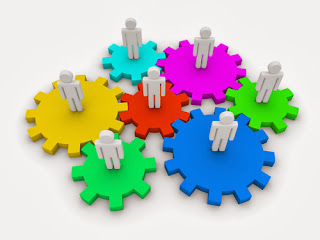 An individual tells a story - at first it is best as a wholly fictional one to practice the skill, then tell a story about the real situation people want to explore. In this case we chose The Wizard of Oz. This telling is a watered-down, facts-on-the-ground version, e.g. "country girl longs to go to a perfect place where she will be perfectly loved and understood, a tornado comes along and magically transports her to what seems like a magical place but she accidentally kills a witch in the process of getting there. The witch's sister, also a witch, becomes the girl's sworn enemy and under the constant threats posed by this witch the girl must to go Oz to get a wizard to help her get home. Along the way she meets a scarecrow, a lion and a tin man who help her get to Oz where they all discover the wizard is a big phony and they had everything they needed inside them all along."
The story is then told again, either by the same person, or by a new person in the group, only this time it is told in the first person from the point of view of one of the characters. Start with the main character if there is one.

The story is then repeated for as many times as there are characters. In each case, the story is retold in the first person as if told by the next character.

By the time the story is told from the point of view of the wicked witch many versions of the same set of facts are out there in the group. The creative act of imagining events from different perspectives -  of the wizard trying desperately to maintain the illusion of his powers or the plight of the soldiers working for the witch - produces a "state of play." The tension has been redirected to a collaborative creative act which has also become a canvas upon which diverse views about the group situation are projected.Then we are ready to tell the story of events impacting everyone in the organization in the same way and process possible strategies for addressing the conflict.
Emotional agility, like physical agility, is the strength to create nimble, useful responses to unexpected stresses. When situations have complex dimensions and no easy solutions it is invaluable.

Jude Treder-Wolff is a trainer/consultant and writer/performer. She is host and creator of (mostly) TRUE THINGS storytelling slam.  Follow her on Twitter


“To begin assembly one must have the right attitude,” goes a Japanese instruction for assembling a particular object, as quoted in Zen and the Art of Motorcyle Maintenance. The "right attitude" is one that best serves the action we are preparing to engage in, just as an athlete warms up his/her muscles before using them in the stress of a work-out or game. Psychological and emotional "muscles" that are properly warmed up will perform more effectively and make it less likely that we will experience strain or allow fear to produce a shut-out when things get rolling.
The right warm-up makes everything learned in a training situation or classroom more accessible and immediately useful to the trainee/student. New skills and knowledge - in education, personal growth or a professional train…
13 comments
Read more