Smoking, Attentional Blindness and The Tensions of Change

November 18, 2013
Part one in a series of articles about creativity and the process of change


The farm where I grew up outside a lovely, rural Wisconsin town could change your life in one poorly-timed, seemingly-minor decision. To wear loose-fitting gloves for feeding corn cobs into a crusher, for example, or close your eyes at the wrong second as pitchforks of hay are being thrown in your direction. Life on a working farm is peaceful, nature-centered, and rife with a hundred ways to die on any given day: Heavy equipment with fast-moving rotors and pistons and blade. Towering structures housing tons of grain and hay and free range rodents. Insecticides. Animals who know they are on death row. A person could be run over, buried, sliced, suffocated, burned, impaled, baled, poisoned, drowned, bitten, fall from a great height, at any moment on any given day. And nearly everybody smoked. In our tight-knit community, cigarettes were as much a part of the scene as bake sales, the county fair and Catechism class. There was the chain-smoking, rasping, parish priest who was likable and funny, the hacking, asthmatic police chief who rolled his own tobacco and the 4-H leader who could not sit through a meeting without a nicotine break. I fully qualified for this nicotine-using union in time for high school graduation.


All those seemingly obvious risks to life and limb – along with our health-defying social life dominated by beer, brats and boredom - were woven so completely into ordinary life that we did not think of them as threats. Our fear was directed elsewhere, mainly to avoiding eternity in hell due to sin and failure to comply with a full menu of religious rules and practices which kept us very busy and our mind off things like getting sucked into a hay-baler or trampled by a revenge-driven cow. The town abounded with churches then - they have since been homogenized into a few, supersized, structures, kind of Costcos-for-Christ -and with bars, at least one per block. As for lifestyle-related suffering, most of us simply did not see the connection between today’s head rush and tomorrow’s heart disease.


Smoking was fun in college, and permitted just about everywhere in those heady days of ash trays designed into nearly every public structure including hospital emergency rooms and airplanes, where their incongruity with health and safety was apparently lost on all of us. Smoking was enjoyed equally by my peers in the health care field and my parallel world of music and theater. Things have changed dramatically since then, in every way except the propensity of executives to lie before Congress (let us be grateful for Youtube) about the toxic nature of their company’s product once people begin to raise serious questions about it. After decades of advertising not only the coolness, the lifestyle-enhancing, the elegance but also the safety of cigarette-smoking, tobacco executives were called to account by the American public in the form of hearings involving such as things as sworn - as in oath-taking before God – testimony. In the fine tradition of anyone in the last gasp of a tightly-held and profitable illusion, the executives participated fully and respectfully in these hearings with bold and brave lies about the addictive nature of nicotine. The truth would have been as terminally damaging to their brand as their brand is to those who use it. But the tensions of change are so powerful and uncomfortable that its possible these were not so much lies as claims - desperate, false claims bolstered by desperate emotions as the paradigm within which these men attained their status shifts beneath their feet. As George Costanza, one of network television’s most extraordinarily gifted truth-twisters put it, “it’s not a lie if you believe it.”


A new truth is, at the start, impossible to believe if believing it changes everything. Having quit smoking long before it was banned from so many bars and office buildings or within 50 feet of my ex-fiance, I gradually became everything I made fun of back then – a non-smoking, yoga-practicing meditator, inner-life-examiner, and holistic psychotherapist eating a largely organic, free-range, dairy-free, sugar-limited, often fun-and-flavor-free diet– changes due in many ways to friends with better ideas and great skin. Professional as well as personal influences led to my personal awakening and a gradual but sweeping shift in cultural beliefs and attitudes about smoking supported the change. After 25 smoke-free years, I continue to be astonished that the act of inhaling toxic waste deep into my lungs many times a day, an unnatural behavior that goes againstthe fundamental survival instincts for which we are hard-wired, once felt so completely, unquestioningly normal. And it is remarkable that the shift to a healthy nicotine-free life – what seems objectively and rationally right and good – involves so much discomfort and defensiveness.
Our minds are fantastically equipped to filter out anything that might interfere with what we need to believe especially when it is linked to our reward circuitry. Simply being told what is and is not important directs our attention and influences perception. A striking example of this phenomenon was seen in a famous Harvard University study. Volunteers were told to watch a thirty-second film of six people playing basketball, and count the number of passes made by one of the teams. Three people on each team wore matching T-shirts. During the action in one version of the video, a woman holding an umbrella walked through the court, another featured a woman in a gorilla suit. While tallying the number of passes recorded, observers were asked whether they noticed either anything unusual on the video or any people other than the six players. Forty-six percent simply did not notice the woman in the gorilla suit, even though in one version of the film she stopped in the middle of the court, faced the camera and thumped her chest. Out of those nonnoticers, eighty-eight “did not believe that the event had happened until the videotape was replayed for them.”The counters who missed the gorilla were intently focused on their task and unaware of what their minds screened out as unimportant.
This study points up the fact that when we are told to give attention to a thing, we tend to miss or ignore other things that are also happening right before our eyes. In this way we can normalize some of the obvious consequences of our dysfunctional systems, and overlook the more subtle ones as if they were speedbumps in a supermarket parking lot. Like people in love with the wrong person, we fix the facts to fit the feelings. New information that interferes with the established narrative is rejected on contact. We can be blind to very real threats, we can perceive threats where none exist. While denial has its value—especially in the face of psychological overload when it helps us manage by breaking things down into digestible portions—it can also be an impenetrable wall that blocks information from landing on our conscious awareness and limits our understanding of the world. 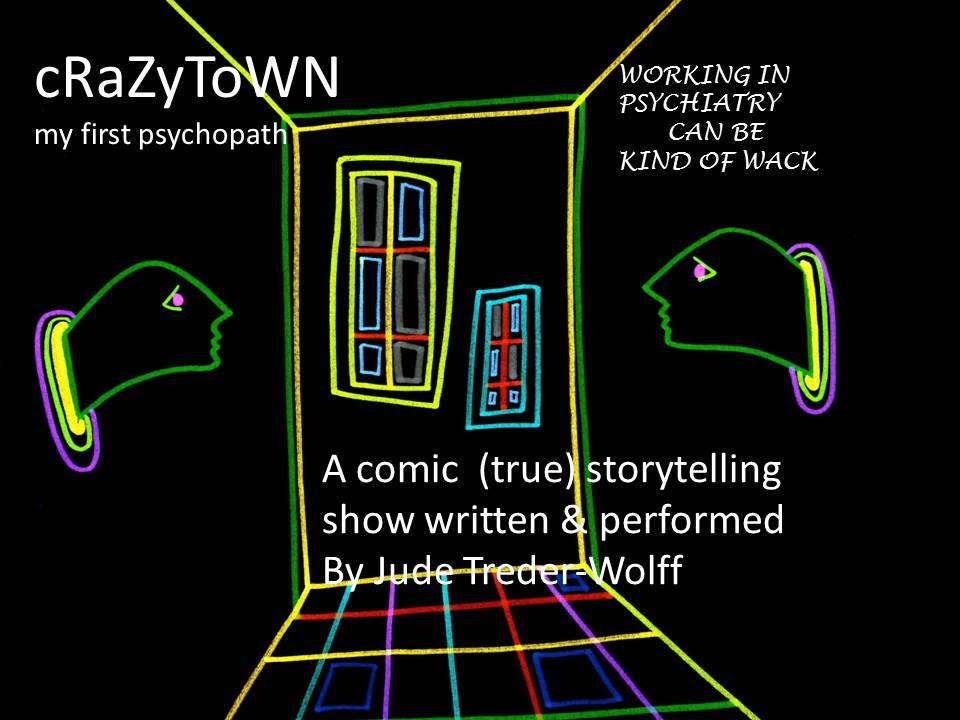 Jude Treder-Wolff, LCSW, RMT, CGP is a trainer/consultant and writer/performer. Her storytelling show Crazytown: my first psychopath will be performed at The Triad, 158 W. 72nd St, NY on May 18, 2014. To buy tickets click here