June 11, 2014
“Self-knowledge is no guarantee of happiness but it is on the side of happiness and can supply the courage to fight for it.”   Simone deBeauvoir

An individual’s mind set has been found to be a powerful driver of perceptions about self and others as well as one’s capabilities and place in the world.  The perspective of a “fixed” mindset is that innate intelligence and talent are more central to successful learning and change than effort and commitment.  Carol Dweck, author of Mindset: The New Psychology of Success argues that we can develop what she calls a “growth” mindset – which is founded on the belief that our most basic abilities can be enhanced through hard work and dedication, “that brains and talent are just the starting point.”  Research shows that even seemingly small social-psychological interventions that target limiting, self-negating thoughts, feelings can lead to deep, sustainable change.

Applied Improvisation and mindset: Shifts in mindset can occur rapidly through a combination of cognitive and emotional heightening with some form of action or experience. The research shows that durable, long-range change in behavior follows a shift in mindset, Applied improvisation, action methods, writing, storytelling, music and other creative forms are uniquely powerful for:
producing the interpersonal connection, expression of deeply-held values, examination of beliefs and creation of a supportive environment that the evidence shows promotes durable, long-range behavior change.
Improv experiences cultivate mental acuity and flexibility, social-emotional connections to others, the psychological “muscle” of exploring uncertainty with courage, heightened awareness of the possibilities of the moment, receptivity to the unpredictable and listening skills.

Dimensions of improv that promote shifts in mindset:

Enemy/Defender – Participants secretly think of a color, then identify one other person in the group who is wearing that color. That person is the “enemy.” Secretly think of another color, then identify one other person in the group who is wearing that color. That person is the “defender.” All group members walk about the space making sure the “defender” is always between self and “enemy.”
Objective;  to have an experience that explores the reality that we are often projecting onto others and being projected upon which produces a hidden dynamic in the life of relationships and groups. The way we are treated by others – e.g. those who chose us as an “enemy” - shapes our perceptions of the interaction, of the other people involved, our responses to the interaction and our feelings about ourselves. What we do to avoid the “enemy” can also be illuminating to discuss after this exercise, which expresses a defensive mindset that is very familiar to all of us.
We went on a wonderful vacation – Yes..and exercises in which the memory of a vacation is developed one sentence at a time alternately by 2 partners. Objectives are to listen closely and build on the offers made by a partner to develop the story; practice making strong offers while also letting go of control of the process; become aware of defensive, i.e. trying to control or direct, game-playing.
3    3-line scenes – Objectives: to practice making strong offers and strong counter-offers; to develop mental agility; to open up imaginative possibilities in collaboration with others;
In this game participants stand in 2 lines facing one another. Line A person opens with a line that gives as much information as possible, e.g “wow I can’t believe you agreed to see me again after I walked out on our disastrous first date exactly one year ago today not that I’m counting.” The line should provide at the very least a relationship between the 2 players, possibly a location and activity they are doing as well. Line B person responds based on the character the line has created and builds on the story line – 3rd person puts a dot on it with a closing line.

Family Reunion – Objectives are to develop skills listening and responding to an unfolding and unpredictable narrative, which breaks up rigid mental patterns; to work toward a flow of creative energy with others through listening, responding and developing a narrative thread; to practice embodied emotions;
In this game a narrator describes events at a family reunion backed by a “slide show”  produced by 2 other actors who assume poses that are then explained by the narrator. Both the slide-creators and the narrators try to pick up cues from each other to co-create the story.
s    Status Games – are useful in exploring the concept of mindset because there is a powerful interplay between status and internalized beliefs about self.  Improv makes great use of status to create interesting scenarios that explore human dynamics through real-time experiences.
Status Conflict: In this game 2 players are assigned role/relationship by the group (siblings, friends, co-workers) and improvise an ordinary, daily activity. The status of each player is established through the interaction. When one player makes a clear commitment to either higher or lower status, the other player responds by embracing the other status. The scene plays out until a natural point of ending or the actors come to a resolution of the conflict that develops.

Variation of status conflict: 2 players are assigned high and low status by the group but develop the role/relationship through their interaction. The objective is to fully commit to the status while trying to work out the conflict that develops. The value of this game lies in discovering what it takes to fully commit to a status position.


Another variation of status conflict: In this game 2 players are given enough information to start a scene (character, occupation, setting, etc) with the further instruction to play lower or higher status than the other. The players are to play their status to the hilt, to the point of the absurd. The discovery lies in novel approaches to the conflict that emerge through fully embracing one’s status and working with is given by the scene partner. 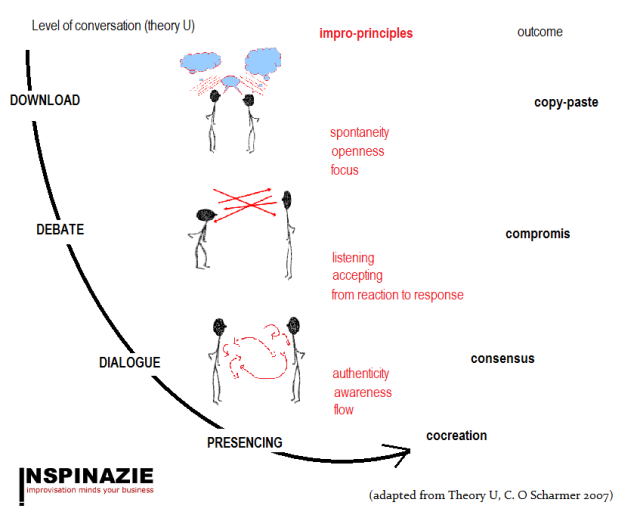 The "U" Theory proposes that the quality of the results that we create in any kind of social system is a function of the quality of awareness, attention, or consciousness that the participants in the system operate from.

Going down the U: “Observe, observe, observe.” Stop downloading and totally immerse yourself in the places of most potential, in the places that matter most to the situation you are dealing with.
At the bottom of the U: “Retreat and reflect, allow the inner knowing to emerge.” Go to the places of stillness where knowing comes to the surface. Here you share and reflect on everything that you have learned from a deep place of listening, asking, ”What wants to emerge here?” and ”How does that relate to the journey forward?” So the key question is: how can we become part of the story of the future rather than holding on to the story of the past?
Going up the U: “Act in an instant.” Explore the future by doing. Develop a prototype. A prototype explores the future by doing something small, speedy, and spontaneous; it quickly generates feedback from all the key stakeholders and allows you to evolve and iterate your idea.  This content and graph from www.presencing.com


“To begin assembly one must have the right attitude,” goes a Japanese instruction for assembling a particular object, as quoted in Zen and the Art of Motorcyle Maintenance. The "right attitude" is one that best serves the action we are preparing to engage in, just as an athlete warms up his/her muscles before using them in the stress of a work-out or game. Psychological and emotional "muscles" that are properly warmed up will perform more effectively and make it less likely that we will experience strain or allow fear to produce a shut-out when things get rolling.
The right warm-up makes everything learned in a training situation or classroom more accessible and immediately useful to the trainee/student. New skills and knowledge - in education, personal growth or a professional train…
10 comments
Read more