June 20, 2014
This is a hand-out created for a workshop at Lifestage, Inc in Sept. 2013 that is part of a monthly series on applied improvisation for the development of emotional intelligence.

"We can train ourselves to avoid
amygdala hijacks.
Improv does this by putting us into
situations that could cause an amygdala hijack-and we train our brain to stay functioning at a higher level."
Viv McWaters, "What To Do When You Don't Know What To Do"
"Emotions serve to draw attention resources to issues that in some way threaten the individual’s integrity; whether that be physical, social or psychological. Emotions are also considered to be adaptive, as they protect the individual from physical harm, facilitate maintenance of self-identity in social settings and guide the individual toward the achievement of tasks and goals. The experience of stress is the manifestation of negative emotions triggered by danger, threat or challenge and which signal to the body the need to prepare for actions of defence and protection." Mark Slaski and Susan Cartwright, “Emotional intelligence training and its implications for stress, health and performance” Stress and Health  Volume 19 2003: 234

A 2002 study of over 200 UK retail managers found that individuals with high EI scores experienced less stress, had significantly better levels of health and well-being and were rated by their line managers as higher performers than those with moderate to low scores.  Slaski, M., & Cartwright, S. (2002). Health performance and emotional intelligence: An exploratory study of retail managers. Stress and Health, 18, 63–68.

"One of the most remarkable of all human skills is our ability to flexibly adapt to nearly every imaginable circumstance. This ability arises in part from our capacity to regulate emotions that are engendered by the situations we face. Drawing upon an array of emotion regulatory strategies, we can accentuate the positive, remain calm in the face of danger, or productively channel anger. One particularly powerful emotion regulation strategy involves changing the way we think in order to change the way we feel."   Kevin N. Ochsner, James J.Gross,“Thinking makes it so:A social cognitive neuroscience approach to emotion regulation” K.Vohs and R. Baumeister(Eds.), The Handbook of Self-Regulation (2003)  Erlbaum, NJ.


The amygdala is hard wired to be able to react quickly to danger signals and keep us safe. In modern days, its direct path to behavioral centers of the lower brain can cause issues with the amygdala being “hijacked” by emotional or psychological stimuli.

Emotional intelligence grows through increasing the connections between emotions and higher cognitive functions - experiencing emotions consciously, labeling them cognitively and acting on them choicefully. 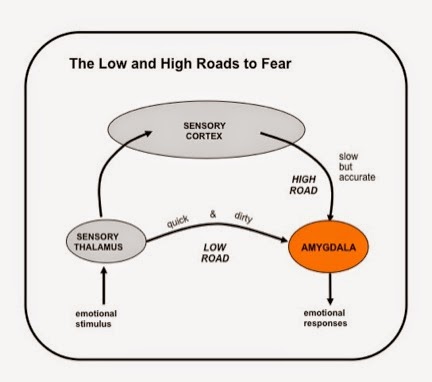 Group stands in a circle. Group members step forward in response to questions, e.g. “Who here knows more than 5 people in the room?” “Who here knows more than 1 person in the room?” “Who drove more than an hour to be here?” “Who is left-handed?” “Who has a pet?” etc. Allow participants to share briefly about their response. Allow group members to come up with questions to find out more about other participants.

I DID IT! EXERCISES: WORDS AND MUSIC –
Objectives:


Review the “hook” of musical themes from movies that most people recognize, including movies that feature heroes who do incredible things, e.g.: Mission Impossible, Theme from Superman, Theme from Rocky, Theme from Magnificent Seven; relationship or interpersonal issues: Theme From The Odd Couple; Sing each theme together to rehearse.
Instruct participants to take 5 minutes to review something that have accomplished in their life that they did not think they could do. Identify: What was the goal? What were the obstacles? How does it feel to have accomplished this?
Each participant can choose what theme music they would like the group to sing as they take center stage. Sing with energy to support the person as they take the stage. Everyone shares from 3-4 minutes.
DEBRIEF: Reflect on the feelings that came up sharing the story with the group. The exercise is about facing and overcoming some degree of fear and anxiety, and some people will feel anxiety in real time about getting up in front of the group and sharing the story. Experiencing the rise of anxiety and moving through it is central to the development of emotional intelligence, which deals with how we take responsibility for and manage emotional states. Discuss the effect of the group support through singing a “theme song” and responding to the story.


3-4 group members self-select to become a class or a meeting of some sort, ageed upon by the group or the group leader. Another participant self-selects to be the leader or teacher of this group. A topic of discussion or a reading if selected  (at our workshop I used a piece of writing from Daniel Goleman’s book to keep with the theme of Emotional Intelligence and insert some of the information we want to cover into the actual exercise, but choose whatever information you want the group to work with) that the teacher or leader will share with the group. Ask the group for an emotion. Everyone in the role-play must assume that emotion as the improv begins. After a minute or so, other group members tag one of the players, take their place and introduce a new emotion. All players must now take on that new emotion and justify the transition as best they can. After a range of different emotions are played, the leader or a player calls “scene.”

THE AMYGDALA HIJACKING:
High-status-low status conflict exercise
Objectives:
A 2-person dialogue is read from the script titled "The Amygdala Hijacking." One character is a high-status person and the other a lower –status person (e.g. boss/employee) but in the first reading of the script the characters are identified only as a high-status and low-status person. After going through the script the group shares about what roles they felt these characters are in – e.g. is it a coach and an athlete? A parent and child? The scene is then redone in improvised fashion using all the different pairings.


The Amygdala Hijacking
By Jude Treder-Wolff

High status person (HSP):
You want to tell me what happened to you in there?

Lower status person (LSP):
I do want to tell you. I do.
HSP:
So…what happened to you in there? I need an explanation.
LSP:
Neural static.

LSP:
Yes. My limbic brain circuitry was signaling anxiety. The anxiety made me all fogged out and I couldn’t think at all which signaled every more anxiety. So…neural static.

HSP:
Your limbic brain? That’s what you want to talk about right now.

LSP:
I just want to try to explain what happened out there. My prefrontal cortex was off line. Its as simple as that.

HSP:
As simple as that. Your prefrontal cortext was offline. Of course. Are you insane?

LSP:
When my prefrontal cortex is offline I am a little insane. So are you, when your amygdala gets triggered.

HSP:
Nobody comes in here talking about my amygdala.

LSP:
See you’re getting worked up. Your’re getting hijacked by your amygdala.

HSP:
Stop talking about my amygdala.

HSP:
Just answer me one question.

LSP:
It’s the alarm system in the brain. It hijacks the ability to think things through. Does that make sense to you?

HSP:
I think you’re trying to confuse me.

LSP:
The amygdala scans what we are experiencing and if anything about it is a “match” for something threatening that happened in the past, it sends out a frantic signal to react to the present in ways that we did in the past. By freezing up, like I did today. Or by gearing up for a fight, like you are right now.  Yeah, your working memory is affected by how upset you are right now.

HSP:
My working memory is kind of busy thinking about…I see what you’re trying to do here.

LSP:
Your working memory – your capacity to pay attention and hold in your mind the facts that are essential for completing a given task or problem – is definitely impaired. So now you know.

HSP:
Now I know what?

LSP:
What happened to me in there.

After the group has heard the dialogue with no specific roles attached to the 2 characters, read it again with the roles clearly defined by the group. Play with the emotions of each character as they go through the scene. Repeat as many times as the group wishes with different role relationships the group wants to assign.

Put the script aside. Improvise the dialogue from the roles of high-low status.

Create a completely new scene with clearly defined high-low status roles in which the high-status person is threatened by the behavior of the low-status person.

Debriefing questions: Did playing with the dialogue help integrate the information? If not, what got in the way? If it did, clarify that according to the research, combining the cognitive, intellectual information with the emotional and creative dimensions of role-playing and character-building strengthens our ability to internalize new learning.

A scripted scene can be used to provide information on any topic in this same way.

Jude Treder-Wolff, LCSW, RMT, CGP is a trainer/consultant and writer/performer. She is host and creator of (mostly) TRUE THINGS storytelling slam.

January 24, 2014
Since September Lifestage has been offering a monthly training workshop exploring the use of improvisation to develop Emotional Intelligence . These workshops have been geared toward the work done by clinicians, educators and trainers who guide the process of personal change or professional development, but as it turns out we have enjoyed some interesting diversity among the participants -  managers, business owners with both employees and customers, community activists, and performers.      Below is a collection of the exercises we have used in the workshops, accompanied by some studies that supports their use.  by Jude Treder-Wolff, LCSW, RMT, CGP       Why Improvisation? Improvisation is a powerful way to become aware of mental habits and patterns. Reflecting on our inner experiences after engaging in an improvisation exercise provides an opportunity to decide whether our mental habits are effective and useful or self-limiting and obsolete.  The tensions of the crea
60 comments
Read more

April 27, 2010
Nicholas Wolff, LCSW, BCD, TEP , Director of Training at Lifestage, Inc and Jude Treder-Wolff, LCSW, RMT, CGP, Trainer/consultant and writer/performer. Follow on twitter @JuTrWolff         “To begin assembly one must have the right attitude,” goes a Japanese instruction for assembling a particular object, as quoted in Zen and the Art of Motorcyle Maintenance. The "right attitude" is one that best serves the action we are preparing to engage in, j ust as an athlete warms up his/her muscles before using them in the stress of a work-out or game. Psychological and emotional "muscles" that are properly warmed up will perform more effectively and make it less likely that we will experience strain or allow fear to produce a shut-out when things get rolling.     The right warm-up makes everything learned in a training situation or classroom more accessible and immediately useful to the trainee/student. New skills and knowledge - in education, personal growth or a profe
47 comments
Read more

December 12, 2013
by Jude Treder-Wolff, LCSW, RMT, CGP @JuTrWolff Nelson Mandela famously forgave the people who imprisoned him, an extraordinary thing especially since they were willing actors in an abusive system, one that imposed decades of indescribable suffering and violence on millions of his people. He forgave Ronald Reagan and Margaret Thatcher for doing business with the apartheid regime and would probably forgive members of the U.S. Congress and political pundits who labeled him a Communist and terrorist even upon the announcement of his death.       There were American diplomats who ignored the ignored the brutality and violence of the apartheid government and supported his imprisonment. Most of us would find that hard to take.  Most of us struggle to accept being misjudged or unfairly labeled even when the consequences are simply emotional tensions. And i n our sound bite culture, there is a rush to idolize a person with such a remarkable emotional capacity.
9 comments
Read more