Pixar's Andrew Stanton thinks we should "fail fast and often," and that might be very good advice

June 01, 2014
Ed Catmull's book Creativity: Overcoming The Unseen Forces That Stand In  The Way of True Inspiration chronicles the creative process at Pixar Animation, and has wisdom for innovators - and improvisers - in every field of endeavor. Pixar brought us the Toy Story trilogy, Up and Finding Nemo, to name a few of the most pioneering, artistic films ever made, animated or otherwise. As described by Catmull the Pixar culture achieves its high level of creativity because of a perspective on failure that is unusual in corporate life. Here is an example of this, from a page on the books website, titled Build A Successful Creative Culture With 7 Core Principles From Pixar:

"During the making of Toy Story 2, an employee used a computer command that accidentally wiped out the drives where the entire movie was stored. First, Woody’s hat disappeared. Then his boots. Then he was gone entirely. Ultimately, 90% of the film was erased in a matter of seconds. Pixar didn’t try to find and punish the person responsible. Luckily, the movie’s supervising technical director had recently had a baby, which meant that she’d been forced to work more from home, which meant that she’d created her own weekly download system. Thanks to her improvised system, the files were restored, the deadline was met, and the rest is history."
This is a very different message than most institutions communicate to people within its sphere of influence. Large systems are slow to change, especially bureaucracies and established institutions with deep roots to the past. In my training workshops with staff members at all levels of an organizations - in education, clinical and corporate settings as well as large not-for-profits  - the perception seems to be that the stakes are too high, jobs on the line, and risk to reputation too great for mistakes to be okay, let alone all-out failure. Old approaches become increasingly more archaic as technology continues to outpace our ability to adapt. Stress levels rise and remain high as a result, which inhibits the creative thinking needed to deal with emerging problems, which then become even bigger and more complex.
The paradox of our failure-phobic thinking is that at a time when we most need to learn new skills and internalize new knowledge as rapidly as possible in order to address incipient situations, the old ways almost guarantee that we will fail to meet real and immediate demands. We do have some power, though, and that is in our individual creative development, to which we can dedicate as much time, energy and resources as we like and benefit greatly from the minute we start. 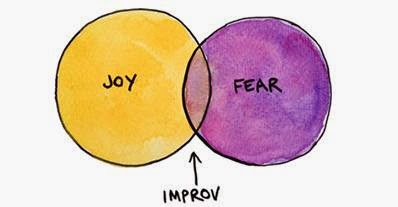 Applied improvisation is a creative experience that cultivates the psychological skill set of accepting the absolute inevitability of failure. As improvisers we embrace failure as a vital part of anything that we hope to become really good at doing, ideally skills that make us more effective in personal and professional life.
Andrew Stanton, one of Pixar's directors, encourages his people to "fail early and fail fast" and "be wrong as fast as you can" in order to produce a mindset that "turns pain into progress." Catmull writes:
"Left to their own devices, most people don't want to fail. But Andrew Stanton isn't most people. He thinks of failure like learning to ride a bike; it isn't conceivable that you would learn to do this without making mistakes-without toppling over a few times. 'Get a bike that's as low to the ground as you can find, put on elbow and knee pads so you're not afraid of falling, and go,' he says. If you apply this mindset to everything new you attempt, you can begin to subvert the negative connotation associated with making mistakes. Says Andrew: 'You wouldn't say to somebody who is first learning to play the guitar, 'You better think really hard about where you put your fingers on the guitar neck before you strum, because you only get to strum once, and that's it. And if you get that wrong, we're going to move on.' That's no way to learn, is it?'
This doesn't mean that Andrew enjoys it when he puts his work up for others to judge, and it is found wanting. But he deals with the possibility of failure by addressing it head on...To be wrong as fast as you can is to sign up for aggressive, rapid learning." (p. 109)

The joy of improv, the electric charge we can experience through the experience of a unique combination of structure and agreement with risk and unpredictability. The fun is in the surprising directions an improvised interaction will go, and the more skill we bring to the process the most surprising and inventive we will be. This is absolutely true in improvisation, as well as in our day-to-day real life interactions at home and work, in which the stakes are our own and others' well-being and the innovative thinking we need now more than ever.

Jude Treder-Wolff, LCSW, RMT, CGP is a trainer/consultant and writer/performer. She is host and creator of (mostly) TRUE THINGS storytelling slam.