There is a great uncertainty in improvisation experiences that can be very uncomfortable, but the fact that everyone involved has agreed to this discomfort makes it transformative, both in the creative process unfolding and for ourselves. There is no way to predict what will play out. And because the experience is being created in real time, through the interaction itself, no one is really in control. This is a radical departure from the structured worlds in which most of us live and work. When others are also willing let go of some of their self-protective layering we have an opportunity to become more aware of mental structures and defenses and at the same time experience what life might be like if we were able to be less encumbered by them.
An article in Harvard Business Review  “For A More Flexible Workforce Hire Self-Aware People” links higher self-awareness to the capacity to be flexible and shift in response to changing situations. Change is constant, uncomfortable and challenging, but there is a great 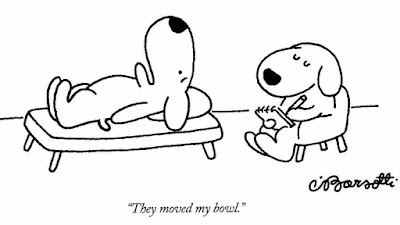 deal of self-knowledge we can gain from using the tension and discomfort that arises from it. “Understanding that one has certain tendencies leads to recognition that those tendencies serve one better in some situations than others. That recognition in turn leads to a willingness to assess a situation and adjust one’s approach to it. Self-awareness makes it easier to understand one’s own needs and likely reactions if certain events occurred, thereby facilitating evaluation of alternative solutions.” The article defines self-awareness as the understanding of one’s own needs, emotions, abilities, and behavior, indicating that "a person able to identify his or her own strengths and weaknesses will be more effective.” from "Reap The Rewards of Improv-ing Self-Awareness" on LinkedIn Pulse

Some of the rules of improvisation are applicable to the process of developing the skills and mind set associated with Emotional Intelligence, which is research shows has enormous benefits to personal and professional life. Some of these rules - explored in the IMPROV RULES workshop on June 13 at Lifestage - are:

BIPPITY BOP
OBJECTIVES:
To generate spontaneity and the state of play in a group;
To focus attention on the here and now;
To reduce self-consciousness and anxiety;
To promote rapid-response thinking;

Then add "Ray Charles" to which the person must respond "Yeah, baby."

COMMUNAL MONOLOGUE
Objectives:
To practice jumping in and making offers;
To practice focused listening;
To experience the unfolding of a story withing having control of where it will go;
To generate spontaneity while collaborating in a group

One player begins telling a story, either as a character or simply by starting with "Once upon a time." At any time, another player may tag out the speaker and continue exactly where the story left off.

LAST WORD
Objectives:
To develop listening skills;
To practice jumping in to contribute without over-thinking/shutting down;
To practice working with others in a creative process;
Emotional Intelligence skills: (same as Communal Monologue)

Player #1 begins a story based on a suggestion, using 1 sentence. The last word of that sentence becomes the first word of the next players' sentence, and so on. The 1-sentence at a time story develops until it reaches some sort of conclusion.

CONDUCTED STORY
Objectives:
To develop listening skills;
To practice jumping in to contribute without over-thinking/shutting down;
To practice working with others in a creative process;


Group members sit close together. The facilitator or another member becomes the conductor, standing in the center. The conductor points to a player who begins a story and continues telling it until the conductor points to another player, who must pick up exactly where the last person left off. This can be done in conjunction with "last word" in which case the next teller must start telling the next sentence in the story when pointed to by the conductor, using the last word he/she heard. If the person point to hesitates too long or messes up the story line, the group chants "die die die" as the person must stage a dramatic stage death and leave the circle. The game continues until there is 1 person left or the story is complete. 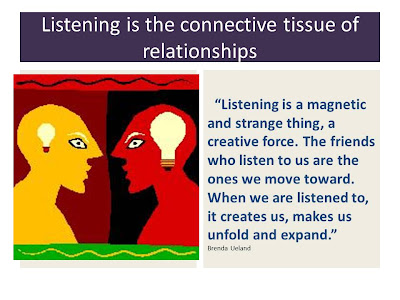 Debrief: How did the scene change when the mantra was introduced to one player?
What was it like to express an emotion indirectly and what choices were made?
What were the challenges of receiving the negative, hostile or sad emotional
messages? 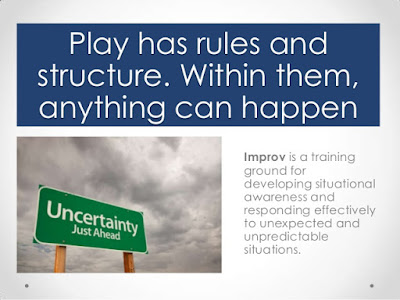 This is from an interesting article from the Ivey Business Journal about the importance of "learning organization" in today's complex professional enviroments.
"If the creativity and adaptability required to deal with complexity are to be exercised and even maximized, the organization needs to have the capacity to learn and improvise.
There are several elements that have proven troubling for organizations in this regard. At the individual level, dealing with complexity means that individuals need a comfort level with ambiguity and a willingness to learn. As Guy Claxton, author of the book Live and Learn noted, one of the biggest barriers to learning is our resistance to let go of the 4C’s – the desire to be consistent, comfortable, competent and confident. We add a fifth to the list – the desire for control. Protecting and preserving these five C’s is a huge barrier to individual growth and development.
Yet, developing a learning organization means more than having a bunch of capable individuals. It is clear that complexity dictates that the understanding and associated action is a shared endeavor, and that therefore there are critical group elements that underpin organizational learning capability. Many of these are embedded in the simple process rules of improvisers around listening, yes-anding, supporting one another, being accountable to one another and to the joint goal." READ ARTICLE
Two new books that are a great resources for games and exercises that can be adapted for classes, trainings and workshops: The Playbook: Improv Games For Performers by William Hall
Easy: Your Lifepass To Creativity and Confidence by Paul Z Jackson (President of the Applied Improvisation Network)
Jude Treder-Wolff is a consultant/trainer and writer/performer who designs and facilitates workshops for personal and professional development. She is host and creator of (mostly) TRUE THINGS, a show that features true stories, with a twist.

April 27, 2010
Nicholas Wolff, LCSW, BCD, TEP , Director of Training at Lifestage, Inc and Jude Treder-Wolff, LCSW, RMT, CGP, Trainer/consultant and writer/performer. Follow on twitter @JuTrWolff         “To begin assembly one must have the right attitude,” goes a Japanese instruction for assembling a particular object, as quoted in Zen and the Art of Motorcyle Maintenance. The "right attitude" is one that best serves the action we are preparing to engage in, j ust as an athlete warms up his/her muscles before using them in the stress of a work-out or game. Psychological and emotional "muscles" that are properly warmed up will perform more effectively and make it less likely that we will experience strain or allow fear to produce a shut-out when things get rolling.     The right warm-up makes everything learned in a training situation or classroom more accessible and immediately useful to the trainee/student. New skills and knowledge - in education, personal growth or a profe
79 comments
Read more